Futuristic Technology Found in Restaurants Around the World 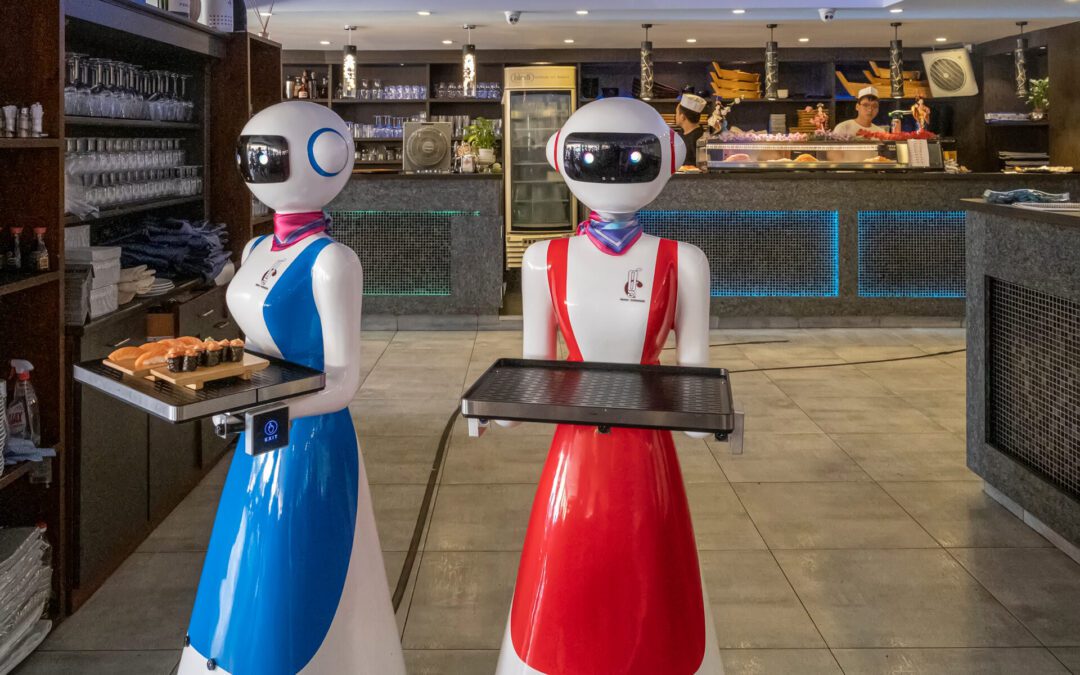 The future is here! Well… not flying cars and self-inflatable jackets like the ones in Robert Zemeckis Back To The Future, but we have some pretty innovative restaurants. Having your food delivered on a conveyor belt and a robot are things that exist in our time. The following futuristic restaurants give you an insight into how the food and beverage, and hospitality industry are changing. 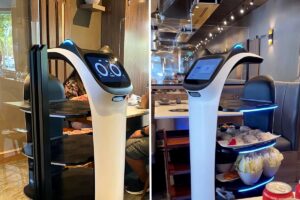 Tomokazu, a Japanese food Vancouver-based restaurant, struggled to find staff and candidates during the pandemic and which forced it to be creative in how it was going to deal with staff shortages in the labor market. After reviewing their options, the restaurant decided to employ robot servers. That’s right robot servers! This decision helped the restaurant balance its labor costs which led to better pay and benefits for the human staff.

The cat robot servers are happy all the time and sound a tune as they whiz around the restaurant dropping off meals at customers’ tables. Meals range from $25.95 for children and $36.95 for adults. To order your meals you use a QR code to place your order electronically.

If you ask nicely, the staff also let you interact with the robots, when they are not busy dropping off food, of course. The robots like to be pet on the crown of their heads and even display different faces to express their emotions. 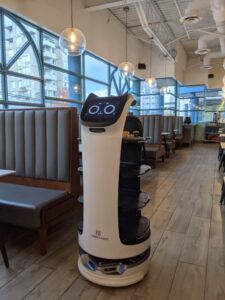 The restaurant is not the only one to have robot servers, but this one is definitely one of the cutest! 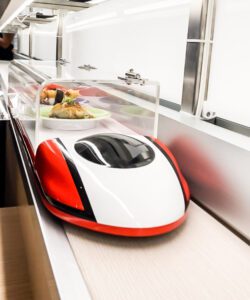 The Sushi Board restaurant is a Vancouver-based restaurant that serves meals on a train that travels along a conveyor belt. In Japan, it is common to see sushi restaurants that deliver dishes to diners on a conveyor belt, but Sushi Board does it uniquely by having dishes travel inside a mini train in the image of the famously known bullet train.

At the restaurant, customers order their meals using an iPad that then sends orders directly to the kitchen where their meals will be freshly prepared. Once it is prepared, the meal is placed on the bullet train, and it is sent on its journey to the customer’s table. 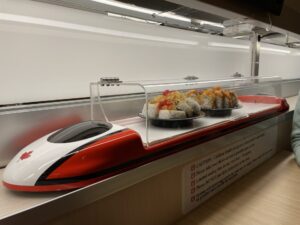 Mirai Resu is an interactive restaurant of the future. The Japanese restaurant has implemented augmented reality (AR), tablets, and projection aspects so, customers have things to interact with while they are in the restaurant. 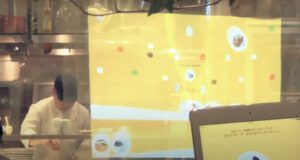 In an area of the restaurant, there is a bar that you would see in technology stores like Apple with several iPads and devices plugged in. Customers can order dishes on the iPads, and as they are waiting they can play a Disk Drop-like game with the order that you place. Once you have placed your order, you can send the order to a screen in front of the bar where the order drops as a ball. 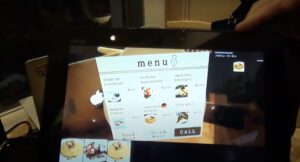 Another technological part of the restaurant is ordering food through a headpiece that has a camera that then interacts with a marker that is often used with augmented reality (AR). With the headpiece, you can then look through an iPad pointing towards the AR marker so that a menu pops up. This technology piece is great for displaying translations and menus to improve the interaction and transition between customers and staff. 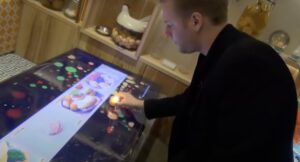 Lastly, the restaurant also features a section where you can order through your table. The table is a regular tv screen, the innovative part is how you interact with the screen. To click and explore the menu, you move around a candle that is detected by a controller above the table. The controller has infrared sensors that detect the heat from the candle, and according to its movements, it makes the menu on the screen move.

If you are excited to have an eating-out night filled with technology, Mirai Resu is the restaurant you want to visit. 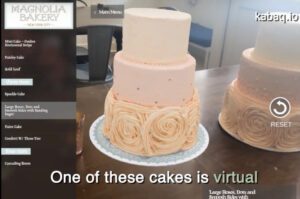 New York City’s, Magnolia Bakery, is a cherished bakery that was first opened in 1996. The store is known for setting “the standard for tried-and-true desserts and baked goods.” The bakery has been baking goods from scratch for 26 years. Their products include cakes, cupcakes, banana pudding, other classic baked goods, and seasonal treats.

In 2018, the NYCity-based bakery partnered with Kabaq, an NYC-based startup founded in 2016, that stitches together 360° photographs to create and project 3D visualizations of food. With the partnership, customers can come in and use technology to display wedding cakes on a table through augmented reality (AR). Customers can zoom in and out to explore and look at the cake in detail.

Magnolia Bakery is not the only business to use AR but it is for sure showing the potential AR has in food. 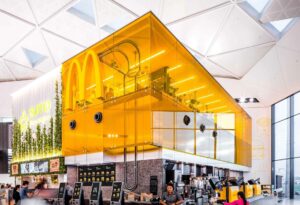 Conveyor belts are not new. They are used in many sushi restaurants, grocery stores, airports, etc, but no major fast food restaurant has used them like McDonald’s.

This McDonald’s at the Sydney International Airport has been designed to have the kitchen above the counter to save on space. The innovative design meant orders need to be delivered down to the counter once they are ready. Having multiple employees going up and down stairs with customer orders did not sound like an efficient or safe solution. That’s when the conveyor belts came into play.

When orders are ready for the customer, they are attached to the conveyor belt that then delivers the orders down to the main level where the orders are taken by staff at the counter and handed off to the customer.

You can visit Landini Associates’ YouTube video to learn more about this innovative McDonald’s. 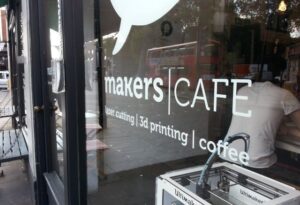 3D printing has been around for many years and it has become quite an incredible concept and invention. In 2014, a California-based company called Organovo successfully bioprinted human livers and kidneys. MakersCafe Coffee Shop is not printing human organs but it is printing edible food items.

MakersCafe Coffee Shop was founded and opened by Soner Ozencw in hopes of “creating a place for makers to gather, discuss, learn, share and make.” 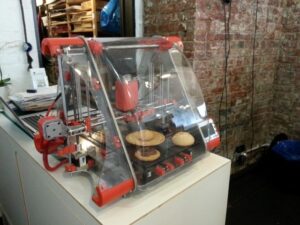 The cafe welcomes ‘makers’ to meet, collaborate, share ideas, and have a good brew. There are many 3D printing machines located around the cafe so individuals can print anything they’d like. Along with that, there are some 3D food-based printing machines. These machines can make actual, real food that you can eat!

How these restaurants are changing the world

These futuristic restaurants like Tomokazu and its robot waiters prove how technology can be incredibly amazing for the restaurant industry. These robots can help restaurants deal with the ever-rising labor shortages industries around the world are currently experiencing. The few employees business have and can obtain will have the opportunity to focus on other areas of their jobs to better enhance a customer’s dining experience. It will also help increase the business’ operational efficiency.

Also, MakersCafe Coffee Shop is showcasing how in the years, decades, and centuries to come it might be a possibility that we could 3D print foods that have run out due to our rapidly rising population.

At TechRyde Inc. our technology helps restaurants improve efficiency by streamlining their digital menus and third-party order management. Want to read more check out our other blogs.